The History of Sudeley Castle Lodge

Having been Consecrated at Tewkesbury on 14th March, 1981, the Sudeley Castle Lodge held its first meeting at the Castle in Winchcombe on 13th April with a capacity attendance of 19 Officers, 13 Members and 23 Visitors.  The Robing Room was in an ancient kitchen of the Castle and the Lodge met in the Library, a long narrow room only just suitable for the purpose because visitors and members sat mainly behind the Master’s and Senior Warden’s chairs.  A few could be accommodated in a row alongside the Junior Warden, but the Secretary and Treasurer were housed in a window bay in the corner of the room, behind a grand piano.

The main Lodge furniture had been loaned by the Lodge of St Paul,  (later purchased, but since sold to Edenwall Lodge), but some items had been made or donated by Founder members; Bro James turned the wooden Alms bowls, Bro Clarke made the gavels and donated the handsome VSL, Bro Walker gave a splendid Tyler’s sword, and WBro Deakin presented a cheque for £50 to buy an organ.  The room was so narrow that in order to allow maximum space for perambulations, the Tracing Boards (still on loan from Civitas Lodge) were positioned in the fireplace opposite the Junior Warden, a tradition continued to this day.

It was a romantic setting for a Lodge meeting, the walls lined with priceless paintings, old books and tapestries, and fine porcelain.   An antique clock charmingly chimed the hours and a lifelike waxwork figure of an old librarian stood in one corner (he was elected an honorary Master Mason).  At our first Raising Ceremony there was a rush by some helpful visitors to find the switches to the wall lights which illuminated the paintings but they had to be restrained because the paintings were linked to an alarm system which would have caused an invasion by the local police,  so Third Degree ceremonies had to remain well lit. 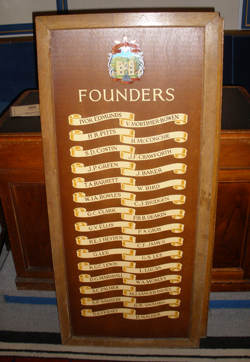 The Tyler had to stand outside in a draughty corridor and it was also a difficult job bringing our furniture up through narrow corridors from a damp cellar.  The dampness became more obvious as time went on because a musty smell began to pervade our meetings and mildew and warped veneers began to appear on the carpet and pedestals.

After the meetings we would cross the old courtyard to the stable restaurant where the Castle’s staff of waitresses, used only to serving leisurely dainty teas to a few visitors at a time,  needed to be retrained in fast-food service to over 50 hungry men.

In January 1982 the Castle suffered a burst water pipe and an emergency meeting had to be held in Winchcombe Parish Hall which was then also used as our Rehearsal Room.

The Lodge progressed happily until January 1984, when the Castle’s owners decided to come back into private residence and wanted no further private meetings to be held at the castle.  Sadly, we needed to find an alternative home and were able to move temporarily to Tewkesbury Masonic Hall.  It was at our second meeting  here that the Lodge banner, designed by WBro Crawforth and stitched by his wife,  was dedicated by the Provincial Grand Master, RWBro Cyril Hollinshead.

Our agreement with the Tewkesbury Masonic Hall Committee allowed us to meet there until our ‘season’ ended in May, when a decision as to our permanent home had to be made.   It was therefore at an Emergency Meeting in June 1984 that a majority decision was taken that the Lodge be held in future at Stow-on-the-Wold, thereby retaining its rural, Cotswold character.  Since that date we have been made most welcome by the Prince of  Wales Lodge,  No 951, and have been grateful to them for having offered us a permanent home.  One of the arguments put forward by those wishing to stay in Tewkesbury was that winter weather would prevent members getting over the hills to Stow, but there has been only one occasion when this has occurred, and we quickly ‘Opened and Closed’ in the Liberal Club in Cheltenham that evening to maintain our continuity.

“Sudeley Gatehouse” by TudorQueen6 – Own work. Licensed under CC BY-SA 3.0 via Commons.

We use cookies on our website to give you the most relevant experience by remembering your preferences and repeat visits. By clicking “Accept All”, you consent to the use of ALL the cookies. However, you may visit "Cookie Settings" to provide a controlled consent.
Cookie SettingsAccept All
Manage consent

This website uses cookies to improve your experience while you navigate through the website. Out of these, the cookies that are categorized as necessary are stored on your browser as they are essential for the working of basic functionalities of the website. We also use third-party cookies that help us analyze and understand how you use this website. These cookies will be stored in your browser only with your consent. You also have the option to opt-out of these cookies. But opting out of some of these cookies may affect your browsing experience.
Necessary Always Enabled
Necessary cookies are absolutely essential for the website to function properly. These cookies ensure basic functionalities and security features of the website, anonymously.
Functional
Functional cookies help to perform certain functionalities like sharing the content of the website on social media platforms, collect feedbacks, and other third-party features.
Performance
Performance cookies are used to understand and analyze the key performance indexes of the website which helps in delivering a better user experience for the visitors.
Analytics
Analytical cookies are used to understand how visitors interact with the website. These cookies help provide information on metrics the number of visitors, bounce rate, traffic source, etc.
Advertisement
Advertisement cookies are used to provide visitors with relevant ads and marketing campaigns. These cookies track visitors across websites and collect information to provide customized ads.
Others
Other uncategorized cookies are those that are being analyzed and have not been classified into a category as yet.
SAVE & ACCEPT